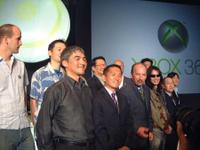 At the recent Xbox 2005 summit in Japan, pretty much all the big name Japanaese game developers came out and voiced their support for the upcoming Xbox 360. Hoping to ensure the people of Japan that the console won't blow. Despite all this hype, a paltry 2% of Japanese gamers are looking forward to the console.
Email Post